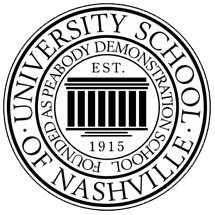 http://www.usn.org
About University School of Nashville

University School of Nashville is an independent, non-sectarian, co-educational day school of 1,080 students in grades kindergarten through 12.

With a goal of fostering a love of learning while building a foundation for college study, the school adheres to an academically rigorous liberal arts program. Learning here remains student-centered, active, and in-depth, with a commitment to progressive ideals. Student responsibility and initiative are encouraged both within and beyond the classroom.

An urban location, bounded by Vanderbilt University, is one of the school’s defining characteristics. Its 1925 Demonstration School building has been renovated and complemented with a library and adjacent visual arts wing. In addition, a suburban 80-acre River Campus provides playing fields, an eight-lane track, eight tennis courts, and a wetland site for science research.

The school’s history and mission are rooted in a 19th century initiative for educating teachers, supporting innovation, and demonstrating proven teaching methods. In 1915, the George Peabody College of Education opened Peabody Demonstration School, USN’s predecessor, which earned a national reputation for its curriculum and faculty. In 1974, a few years before its ultimate merger with Vanderbilt University, Peabody College announced plans to close the Demonstration School. Immediately thereafter, a group of parents, alumni, students and teachers joined forces to reconstitute and re-charter the school as University School of Nashville, an independent institution dedicated to carrying the legacy of PDS forward.